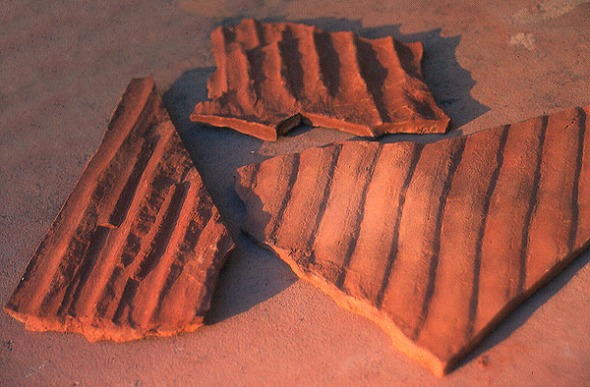 At a special desert place where I go to contemplate the world and life from within a sacred circle, I found a large area of ripple rock. This is slate-like sandstone that actually has embedded or recorded in the rock surface the precise ripple patterns from when that sandstone was laid down at the bottom of a lake or shallow sea. Some natural event rapidly covered it up and locked in that exact pattern of waves caused by the water on that particular day, perhaps 60 or 70 million years ago!

Now, after being buried for all that time, it is being slowly exposed here in the parched desert, a faint echo of water from ages past. The fascinating thing about ripple rock is that the image preserved represents something relatable to a human timescale. In most geologic forms, we are looking at shapes that reflect what happened to the specimen over millions of years, but here is a rock that presents a flash-frozen moment of time, like a time fossil. I can touch this rock and feel the ripples with my hand. I can almost hear the lapping of the waves as they washed over that sand on that one day so long ago. I can relate to it.

I suppose some things human (Pompeii comes to mind) are recorded in similar fashion, but surely most of what we do will never be so preserved. How many lives and stories and wondrous events of nature have happened on this planet over the millions upon millions of years that were not so fortunate to be recorded in a stone panel by a freakish chance?

Sometimes as I watch a particularly wonderful sunset, it occurs to me that there must have been billions of such beautiful sunsets over the history of this earth that went, well, unappreciated.

I wonder if a dinosaur ever paused to look up in hazy curiosity at a red-orange sky?