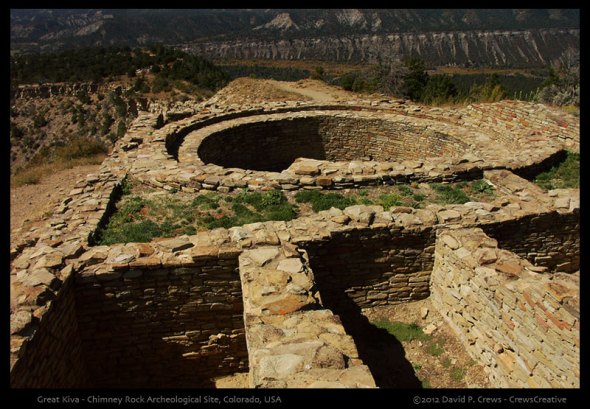 I enjoy visiting and appreciating the archeological sites of the Ancestral Puebloan people of the desert southwest of the United States. I’m still adjusting to this new terminology, now arguably preferred by most Puebloans and archeologists over the more well-known term, “Anasazi,” which is derived from the Navajo word for “enemy.” (One writer, though, has pointed out that the term “pueblo” is from the Spanish conquistadors, who were much more of an enemy to the Puebloans.) 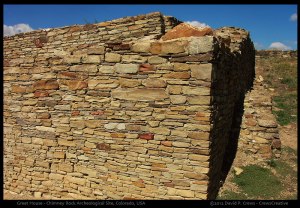 This particular site is in southern Colorado and I had passed it by on many trips to and from the mountains until I decided to make the effort to see it in 2008. I was surprised at the size and beauty of the buildings, here in one of the most northern Puebloan sites, nestled in the foothills of the Rocky Mountains. It was cold in the winter, but they built here because of the striking rock formation we call “Chimney Rock.” The Ancestral Puebloans used this feature as a lunar observatory. They built a large ceremonial Great House and Great Kiva, reminiscent of the ones in Chaco Canyon, off to the southwest in New Mexico. There are approximately 200 rooms in the complex which was built about 1,000  to 1,100 CE.

The lunar connection is important, as the moon goes through a positional cycle that lasts about 18.6 years. At the end of the cycle, the moon appears to pause for a while before “reversing course.” From the ridge where the Great House was built, that lunar standstill causes the moon to appear directly between the two “chimneys” of rock that protrude. The last time this occurred was in 2004-2008. The next Major Lunar Standstill will occur about 2022.
More information and some interesting photos of the event here.

This is a nice site to visit. There is a bit of a walk to see the Great House and kivas. Unfortunately, there is a distracting and out of place fire observatory on the site between the Great House and the chimneys. When I was there, they were talking about the possibility of it being removed at some point as it also blocks the lunar standstill view. I hope they do.

There is also a move underway to have Chimney Rock site designated as a National Monument to protect it into the future. I support this effort.

I also have some photos of Chaco Canyon and other sites that I will share as I can.