Here is a link to a short (4 minute) film I made showing the ritual burning of the Zozobra in Santa Fe. It includes video, effected still photos, and some of my own original deep ambient music tracks. Run full size if you can, and please enjoy it! 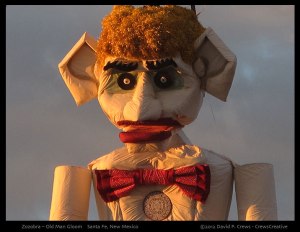 Zozobra represents or symbolizes troubles, worries, and the problems of life. Once each year in September, the city of Santa Fe hosts a very unusual ritual: the burning of the Zozobra. This 51 foot tall statue is made mostly of paper and is actually a marionette – the world’s largest – which is ritually burned in front of tens of thousands of yelling participants, thus releasing all their collected sorrows and problems into the ether and bringing peace and happiness to all who engage with the rite. This ritual has been conducted every year since 1924 – for 88 years as of this year’s event.

[Click on any photo for a larger, higher quality view.]
I was lucky enough to be in Santa Fe on just the right day to attend, and I was truly fascinated to see this essentially pagan, shamanistic ritual played out in front of, for, with, and to a mostly typical American audience. Unlike some of the neighboring pueblo religious events, dances, and rituals that can be attended by non-Indians if they remain quiet and do not disturb the proceedings, this event, invented by a white man, is participatory by everyone and anyone. It is made to be palatable and acceptable to this presumably mostly non-pagan audience by one overriding fact: it is conducted as a very broad, humorous, tongue-in-cheek event. No one really appears to take it seriously and everyone has a party good time.

It struck me, however, that this is actually a very powerful ritual taking place here. Even through the fun and games, the essential and actual power of the symbol comes through for everyone who participates. It might be at a sub-conscious level, or buried under a layer of smirks, but there is no way such a grand metaphor, played out in live action, movie-climax style, cannot be effective as advertised. I have conducted similar rituals at home with friends and a backyard fire pit, casting our slips of paper all inscribed with our regrets and sorrows into the flames, and that was powerful even at that level. This ceremony is public, gargantuan, and potent.

Zozobra is an older manifestation of the modern “Burning Man” event in Nevada each year, but the shamanic ideas and the ceremony of the fire go much farther back in time than even Zozobra, of course. Shamanism is the oldest of the “religions” of mankind and one would think it to be fully buried and fossilized, but that is not the case. Shamanistic societies, tribes, and individuals thrive all across the world. Once in a while, a manifestation of it shows up like a lava intrusion into the solid granite of the orthodox religious cultures of our modern world. Zozobra is one of those, even if it is, perhaps, not intended to be by those who conduct the rite. 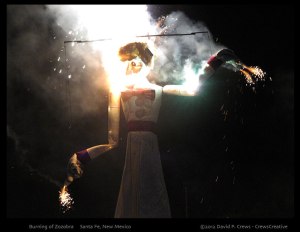 In my little film, I tried to show this multi-level contrast between the broad humor and the serious symbolic work by juxtaposing the circus aspects of the gathering and the undercurrent of true meaning by incorporating the intense, austere soundtrack of my deep ambient music.  I hope you enjoy it, and I’m always interested in and open to your comments. 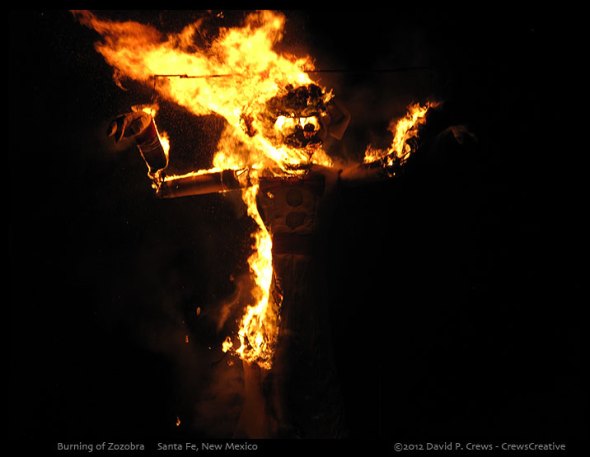