Today, I’m presenting a virtual getaway, especially for anyone stuck in this year’s snowy winter. I’m pleased to offer you my short (7 min.) nature film I shot in November on location in the beautiful country of Costa Rica.

I love waterfalls, and Costa Rica has many lovely ones, both small and very large. All are situated in rain forest settings that invoke images of a lost, green, wild world.

This film also features my original symphonic music score. Be sure to go full screen and volume up.

My posting frequency on this blog has slowed recently due to my becoming deeply involved in writing my first novel. The book, an epic science-fiction/fantasy series, is approaching completion and I will update this blog as I can, but I thought that for now I’d post some recent thoughts in the forms of a poem and a digital image or two.

Often, I find myself simultaneously holding different visions of my humanity. On one hand, I sense the melancholy (which is not the same as sadness or hopelessness) of our situation here in this physical reality. It is the conundrum of Ralph Waldo Emerson’s metaphor of the Stairs that I’ve spoken of several times in these pages. Upon those stairs, we awake and know not whence we came, nor where we are bound. It is an authentic and enduring melancholy for every person–a melancholy borne of that mystery.

On the other hand, I feel a strong imperative to constantly and consciously create real happiness and fulfillment for myself within the time I exist upon those mysterious stairs. I do so by being a creator and I live that role right now. This is the only way to be in this life that brings me (or, I will maintain, anyone else) true joy. It is what Casteneda called a “Path with Heart,” and it brings unexpected delights and challenges to us, while each of us also remains involuntarily bound to that mysterious river of time that leads us to an unknown destination.

Those two visions emerged into two different creations recently, and I thought I’d share them here while I may be away from more regular blog posts for a while.

The Melancholy observation is represented by a poem that is my take on Emerson’s Stairs. It came fully formed out of sleep and the spirit realm of dream last night. The accompanying image (above) is my digital art alteration or enhancement of a detail from one of my favorite painters, Thomas Cole. (It’s from his four panel “Voyage of Life” series from 1842.) His paintings include some directly religious elements, but I believe the idea of guidance from “outside” of ourselves is possible in many shapes and forms that cannot be empirically measured. We are, in any case, on the boat and in motion to an unseen destination.

The Creative/happiness/joy/challenge observation is an original saying and a digital artwork rendered on a moonrise photograph I took along the Caribbean coast in Costa Rica a few months ago.

May we all continue to look, wonder, and choose to make our time upon the waters of life worthwhile by creating joy.

We make no stops– 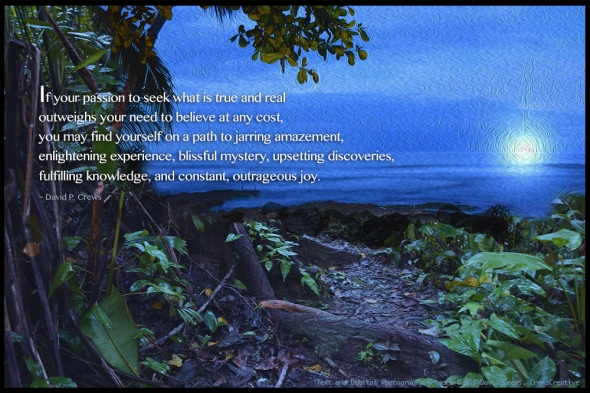 “The time has come for more psychedelic explorers to come out of the closet about the benefits of these life-changing visionary plants. I want to live in a world where exploring a self-improving, 100 percent natural drug doesn’t come with jail time. Where peaceful navigation of different realms of consciousness is a basic human right.”
Genna Marie Robustelli

This is from a very interesting article I found in The Tico Times (Costa Rica) from Genna Robustelli, about the effects and healing nature of the very intense entheogen called Iboga, native to Africa. I liked this report because it is focused on the curanderismo (healing) aspects of the experience, both from a physical standpoint and from a psychological/spiritual one. Encountering Dr. Iboga, as with Mother Ayahuasca, can result in a no-holds-barred, hard-core analysis of one’s situation in life and can bring clarity and new commitment to it. These experiences are unquestionably worth the discomforts one endures, but neither is an easy path to take.

Often, so called “trip reports” from psychic or entheogenic explorers can be so subjective or symbolic to that person that they are difficult for anyone else to completely relate to. This includes my own such reports from Ayahuasca experiences. Genna’s report is nicely described and gives what I can perceive is an authentic view of the physical and visionary effects that resulted. Although intrigued by Iboga, I have gravitated to Ayahuasca and felt that Iboga may not be the right path for me. I have to say, however, that I’m tempted by this particular set, setting, and approach. I’d like to see if it could help my own situation and provide another glimpse into that Other dimension that is so tantalizingly close to us, and yet seems so alien to our common lives. Iboga is obviously another powerful chemical ‘technology’ that can reveal the operating system of our souls and bodies – opening Blake’s doors of perception to reveal not only the Infinite, but our very selves within it.

“If the doors of perception were cleansed every thing would appear to man as it is, Infinite. For man has closed himself up, till he sees all things thro’ narrow chinks of his cavern.”

― William Blake, The Marriage of Heaven and Hell