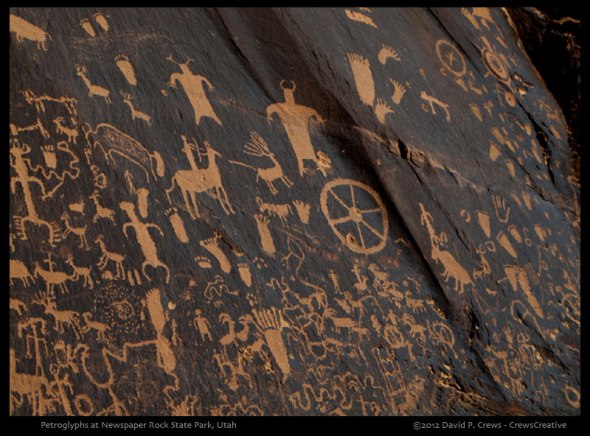 The Shape-shifter’s Tale
(a fragment of a myth)

The Turtle replied, “A horse? That big thing? I don’t know what that would be like. It is too different from being a Turtle.”

“Yes, but you would learn what it is like!”

“I like being a Turtle. Turtle makes sense. Turtle is comfortable and safe.”

The Horse whinnied at him and said, “Neigh – OK, that was a joke. So is that little Sparrow. I’m a Horse and I am happy to be a Horse. That’s the mane thing!” And he whinnied several more times causing the Sparrow to fly away in disgust.

The Boy said, “I AM a Lion!!” and, still smiling, he ran around the meadow making a roaring sound.

The petroglyph panels above are from the remarkable (and remarkably accessible) Newspaper Rock State Park site, right along the roadway to the Needles District of Canyonlands National Park in southeastern Utah.