I just came across this interesting article on the brain’s structure and the nature of consciousness that was published by Wired last year:

For the last 15 years, I’ve been exploring consciousness from a deeply shamanistic perspective with my main purpose to attempt to determine the borders of ontology. This is a quest to determine what is actual and real as opposed to creative fiction. Humans are very good at creative fiction and many idea structures, especially religious ones, are fully and totally believed by many, as if they are real even though they cannot be shown to be ontologically “real.” I – my own consciousness – was subsumed into a fully Christian belief system for the first 46 years of my life. Others have been and still are fully subsumed into that and other, incompatible belief systems. In order to try to get a more reliable view or a better understanding of that border between what exists outside of human interpretation and what is caused by human invention, I have been led to work with some of the great “visionary plant medicines” of the world that seem to transport us into other realms and give us a perspective on our normal, mundane perceptions.

Working extensively with ayahuasca has opened me up to a frontier of exploration into a state that is beyond our everyday perceptions and it may represent a valid window or portal into another dimension of reality. Just as physical tools like microscopes and telescopes have, for the purposes of knowledge acquisition as well as of beauty and wonder, given us a view into worlds vastly smaller and larger than we can personally otherwise “visit,” these substances might be giving us an extremely useful view that we cannot normally access.

The question of ontology is not easily resolved, however, and that is due to our lack of understanding about the nature of consciousness itself, and how the brain functions in that regard. Much has been written and speculated about this, of course, and no one has the answer, but new ideas are emerging. This article is from a neuroscientist, Christof Koch, chief scientific officer at the Allen Institute for Brain Science, and is from a basically reductionist viewpoint (although he delightfully calls himself a “romantic reductionist”): that any and all systems that are complex enough in the right ways, can be considered to be conscious. Here are a couple of excerpts:

Koch: “It’s not that any physical system has consciousness. A black hole, a heap of sand, a bunch of isolated neurons in a dish, they’re not integrated. They have no consciousness. But complex systems do. And how much consciousness they have depends on how many connections they have and how they’re wired up.”

WIRED: “I still can’t shake the feeling that consciousness arising through integrated information is — arbitrary, somehow. Like an assertion of faith.”

Koch: “If you think about any explanation of anything, how far back does it go? We’re confronted with this in physics. Take quantum mechanics, which is the theory that provides the best description we have of the universe at microscopic scales. Quantum mechanics allows us to design MRI and other useful machines and instruments. But why should quantum mechanics hold in our universe? It seems arbitrary! Can we imagine a universe without it, a universe where Planck’s constant has a different value? Ultimately, there’s a point beyond which there’s no further regress.”

WIRED: “I’ve read that you don’t kill insects if you can avoid it.”

Koch: “That’s true. They’re fellow travelers on the road, bookended by eternity on both sides.” 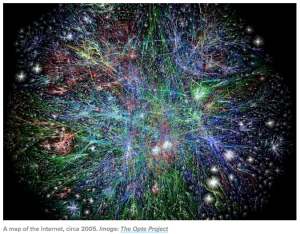 It’s interesting to follow this article’s discussion as it traverses that narrow, fuzzy zone between empirical science and “faith.”

I am, however, attracted to this view of the physicality of consciousness. It seems more “right” because it is more holistic and scaleable. It neither arbitrarily excludes non-human systems from being capable of consciousness, nor tries to place human consciousness on some magical platform of superiority. Where such structural views or mappings of the machinery of consciousness can be limiting or “go wrong” is in stopping with the understandings we gain about the tool itself and deny or disregard the information that comes through that tool (the brain in our case). This hurdle manifests every time someone claims that consciousness altering plants or medicines are “just drugs” or cause “only hallucinations”.

As humans, some of us will certainly continue to push the frontier of knowledge in this direction, however obscure our pioneering pathways or how strongly we may be rejected or vilified in our pursuits. Perhaps soon, however, we may also witness other “self sentient” beings, such as a truly self-aware internet, come into their own consciousness – beings who will be able to assess their own experiences and develop their own data. Hopefully, we’ll be able to compare notes.

The Value of Psychedelics: Realigning Reality

Graham Hancock posted a link to this article and I want to pass it along on my blog as well. It is a thoughtful and interesting essay on the value of ‘psychedelics’ in society and the shifts in the perceived nature of reality one obtains when working with them:

The Revolutionary Potential of Psychedelics, by Aaron Moritz.
www.aaronmoritz.net

He talks about the conundrum that although there is an infinite variety of unique personal experiences with these substances, there are also many common structures to those experiences from one person to another. Aaron states:

“An argument exists, and may not be easily solved, between whether the many compelling structural similarities give us a more fundamental insight into the nature of such mystical experiences than the seemingly endless amounts of detailed variation. Are they are a kind of metaphorical imagineering of the self, externalized and projected outward, or do they point to a more foundational ontological reality?”

This represents the very edge of the frontier. Since all such experiences are subjective, they can be denied by external reductionists while, for the partaker, the experience resounds with profound insights and meaning that he or she cannot deny by resorting to such reductionism and pretending it is all just a fantasy of brain chemicals. That being so, those who have had such immense experiences often find it difficult to interface with those who have not. Relating such experiences can result in being categorized as fanatical or delusional, which can affect their life in practical ways.

The structures of ancient shamanism provide a methodology to contain such experiences in a meaningful manner. Within it, we can place them inside a time-honored society and a set of techniques that, while never claiming to represent empirical proofs for the nature and reality of the vision experiences, legitimize them as personal and sacred experiences that have actual meaning across a broad spectrum of humanity.

Visionary experiences via psychoactive medicines like Ayahuasca, peyote, and psilocybin, often provide a new perspective that allows us – actually gives us the freedom and possibility – to examine that which we assume is reality and to question it for the first time:

“The extraordinary nature of my trips has forced me to question some basic assumptions about what it is that I, or we, can know. Objectivity, that holy ideal, seems now merely an attractive mirage, that when grasped at has actually left me stumbling and clutching air as it reappeares across the room.”

“. . . psychedelics instruct us on the arbitrary nature of consensus reality. A slight tweak in what constitutes our day-to-day brain chemistry, and colorful visionary patterns and interpersonal dissolution would be normality, while the idea that we are all separate individuals, apart from wholeness and love, would be the hallucinogenic trip.”

Once this happens for a person, this stretched and massively expanded perception of the universe can never be returned to the small container of reductionist consensus reality that he or she once held, perhaps by default. There exists now for them another vast and awe inspiring view of things. One only has to turn around and look at it. When we do, then who is to say which is the real and which the unreal? Perhaps both are ontologically real simultaneously in some larger multi-dimensional overview that takes us beyond our human limits.