As a follow-up for the summer photography in my last post, I’m pleased to present a six minute film titled “Big Bend–The Scale of Time.” This is a short preview for my upcoming reflective landscape film about Big Bend National Park in Texas. I am in the process of re-shooting footage in high definition to entirely update and replace the imagery from an older film, while retaining the music track and eventually the incidental poetic script and narration elements. This HD film is hosted on Vimeo and is best seen full-screen.

The cinematography and photography in this short version all come from a brief three-day visit to the park in June, 2014. I plan to return at least twice in the coming months (for longer stays) and obtain much more footage to fill out the main feature. What imagery will I get on my next trip? In June, I didn’t expect to get caught in that dramatic lightning storm or see a cloudy, no-sunrise morning suddenly erupt into an amazing spotlit fan of golden light. Big Bend always surprises me with unexpected scenes of wild and gentle beauty that translate so very well into visual art.
I hope you enjoy my film.

A note about the music: This is my original composition and performance excerpted from the longer film. It won the Calypso Award from the Moondance International Film Festival in 2006, and also a prestigious Silver Telly Award in that same year. 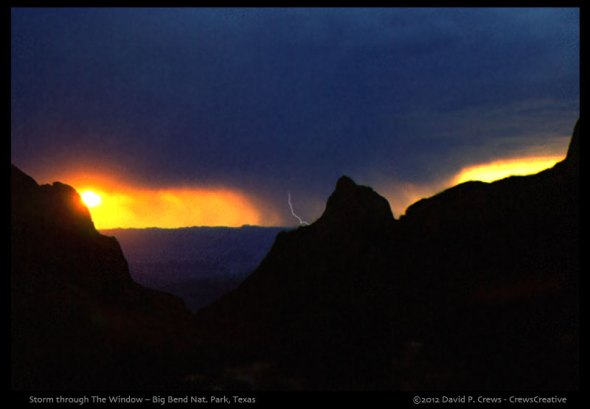 “I am a being of Heaven and Earth, of thunder and lightning, of rain and wind, of the galaxies.”
-Eden Ahbez

A summer storm vies for attention with the setting sun in the Window in the Chisos Mountains in Big Bend National Park, Texas. I’ve been visiting and photographing this amazing place on the planet for over 50 years.