A Tribal Shaman’s View of Us

I believe it is a valuable exercise and privilege to be allowed to see ourselves from a completely different perspective – one from the “outside.” For Westerners, our civilization and culture dominates our worldview so thoroughly that it is difficult to find such an “exterior” assessment of our own ways. Here is one – one that is authentic. This article from The Guardian features some of the observations of Davi Kopenawa Yanomami, one of the most influential tribal leaders in Brazil and an Amazonian shaman. As article author John Vidal says,

“In the past 25 years, he has travelled widely to represent indigenous peoples in meetings and, having lived in both societies, he has a unique viewpoint of western culture. With the help of an anthropologist, Bruce Albert, who interviewed him over several years, he has written his autobiography. It is not just an insight into what a Yanomami leader really thinks, but a devastating critique of how the west lives, showing the gulf between primordial forest and modern city world views.” 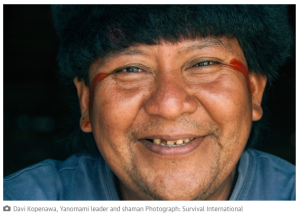 A few choice excerpts from that autobiography (from the article):

“Their cities are full of big houses and innumerable possessions but their elders never give them to anyone. If they were really great men, should they not tell themselves that it would be wise to distribute them all before they make so many more?”

Their thoughts are constantly attached to their merchandise. . . .They do not seem concerned that they are making us all perish with the epidemic of fumes that escape from all these things. They do not think that they are spoiling the earth and the sky, and that they will never be able to recreate new ones.

Their cities are beautiful to see, but the bustle of their inhabitants is frightening. People there live piled up one on top of another and squeezed side by side, as frenzied as wasps in the nest. . . . I can never think calmly in the city. . . .Whenever I stay there too long I become restless and cannot dream.

When they speak about the forest, white people often use the word “environment”. What they refer to in this way is what remains of everything they have destroyed so far. I don’t like this word. The Earth cannot be split apart as if the forest were just a leftover part.

To my thinking, agreement or disagreement with this shaman’s specific views would be beside the point. What is important is listening to him and others like him – finding perspective and truth in the refreshingly honest view of ourselves and our culture spoken by those who live in another, nature-based society. Especially so, as their worlds are being so impacted by ours, whether they wish it or not.

“The Falling Sky: Words of a Yanomami Shaman” by Davi Kopenawa and
Bruce Albert, published by Harvard University Press.